We interview one of the leading fish biologists for Cleveland Metroparks to learn about the fall walleye migration on Lake Erie and why this is the best time to catch one of our favorite fish.

The shorelines of Lake Erie are fiery red from the changing colors of leaves and the air is crisp enough to remind you that another Ohio winter is on the horizon. Anglers along Lake Erie don't shy away from this change in weather, however, as they know it's the unofficial signal for fall walleye.

Fall very well may be the best time of year to catch walleye in lake Erie and several factors like cold water, intralake migration and accessibility all solidify this conclusion.

Michael Durkalec is an aquatic biologist for the Cleveland Metroparks and a walleye angler as well. Durkalec says the incoming cold weather and dropping water temps are great for walleye anglers because they kick the fish’s feeding into high gear. Predators, like walleye, really put on the feedbag this time of year, to help put on enough weight so they can slow their metabolism down for the winter months. This also means walleye are all at their heaviest for the year (with no need for lead weights) so your chances of catching a heavy fish are at their best.

Where to target walleye

Lake Erie is made up of three basins, the east, central and west. The eastern basin is the deepest, with the central basin traversing most of the Ohio shoreline and shallower than the east. The west basin is the shallowest. Walleye prefer cold water and spend much of the warm months in the east basin in the cold depths. As the water temps drop, walleye will begin a bit of a migration toward shallower water, taking them right through the central basin toward the west.

According to Durkalec, this is the perfect time for bank anglers to have as much success as those from a boat. Falling water temperatures will bring walleye into shallow waters and closer to the Ohio shore. Durkalec suggests that fish will be readily found from only a quarter mile out in 30 feet of water or less including all the way up to the shore. Walleye will travel the contours of the rocky shoreline.

Durkalec says that one of the best times to set your hook on voracious fall walleye is when the sun goes down.

“After dark the fish get very active… and their great eyesight brings them into the shallows to hunt at night,” Durkalec said. “They are a predator and they are built for nocturnal hunting.”

Durkalec goes on to say walleye eyes are filled with reflective crystals that reflect ambient light, allowing them to (speculatively) see as well as night as humans during the day. Many of the baitfish species that also traverse the shallow shores at night, do not possess nearly aws well of eyesight, making them easy targets.

So drink your coffee and get a midday nap if you need it and grab your headlamp because walleye will be close, shallow and hungry.

The main prey for walleye are gizzard shad, emerald shiners and in the east basin rainbow smelt. Walleye will also feed on goby minnows in the shallow rocky shorelines.

“Right now anyone targeting walleye is using large crank baits with a shad shape,” Durkalec said. “Other anglers may be using stick baits like a husky jerk.”

Unlike trout, walleye won't necessarily hone in on a specific pattern at one time, but getting the size and movement right are still important.

“Walleye can be funny, you often need the right size and action of your bait but you may go crazy trying to find the right color,” Durkalec said. “Sometimes the craziest colors like fluorescent spots will catch the most fish, but the colors can change weekly.”

There’s always the chance that hand painted and uniquely colored walleye jigs are better at catching anglers than fish, but there is little doubt that some of the fluorescents catch fish, hands down.

Bank anglers will want to focus on slowing their retrieve, slowing it down more as the temperatures fall. Boat anglers are most likely focusing on trolling, with the same principle of slow trolling their lures based on how cold the water temps are.

Lake Erie may be experiencing the good old days of walleye fishing right now. According to Durkalec, the lake is seeing unprecedented spawning numbers and the walleye population is booming. Durkalec said the estimated population of walleye in Lake Erie is between 100 and 150 million fish 15 inches and longer. This gives the anglers some of the best opportunities that have ever existed to bring home a banquet of one of the best eating fish on the planet.

If you’ve never experienced the cultural phenomenon that is catching an eating walleye, there's no reason to keep waiting. Fall is here, the walleye are hungry and there may very well be no better time to fill the fish fry pan. 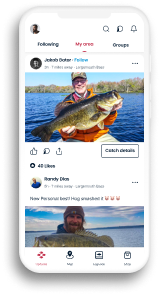 Winter fly fishing tips
Winter comes with new and arduous challenges. Fish move to deep and slow water, your breathable waders may not be good enough and you may be sending in an order for a new rod tip. Learn how to extend your fishing season with the tips you need to stay out longer and catch more fish all winter long.
January 26, 2023
Fishbrain's guide to ice fishing
Ice fishing can seem like a daunting hobby to get into, but Fishbrain has the steps necessary for you to get out of your comfort zone and start drilling your first ice hole.
January 13, 2023
Fall offshore in Florida with Captain Taco Perez
There's no offseason for fishing in Florida, just changes. When late October hits and the weather changes, so must your baits, your tactics and the species you target. Learn from Captain Taco Perez in Fort Lauderdale how to successfully change when the seasons do.
October 26, 2022