Fall is a great time to be on the water. Cool weather, changing leaves and hungry fish make for the perfect time to fish. Take a look at some of our picks for the best species to target during this beautiful time of year.

Leaves are transitioning to beautiful hues of gold, orange and red and morning temperatures leave a familiar chill in the air. Fall is almost here. The arrival of falling leaves and cool temperatures is also followed by disappearing crowds in some of our favorite fishing spots,leaving them all to ourselves.

Here are some of Fishbrain’s favorite species to target in the fall that we think every angler should try and cast for.

Cooling temperatures have these voracious predators on the move and ready to attack your bait. In fall, pike will follow baitfish into shallower water where the small baitfish spawn. Pike will inhabit weeds near these areas waiting to ambush the smaller baitfish and you can take advantage of this. Generally any sort of bright, flashing, lure will work well in inducing a strike.

Your personal best pike will still inhabit a little deeper water, but when the weather is first turning cool, you will have a much better chance at pulling one of these lunkers out from the deep.

As fall goes on, make sure to slow your retrieve down as the colder water will make for sluggish fish.

Fall is a great time to catch striper migrations in huge schools off the East Coast. To understand and time these migrations correctly, you must be armed with knowledge that stripers prefer temperatures between 55 and 68 degrees.

In the fall, when the weather and water cools off, you can find large school of stripers cruising down the coastline. The cool water temps, mean that the fish will actively chase baitfish into shallow waters and the surf, because of the prevalent oxygen that the cold water holds. This opens up the possibilities for beach and surf anglers immensely as stripers will usually thrive in the deeper, cooler, more oxygen-rich water far from the coast.

Out on the open water. if you can find schools of peanut bunker, silversides, or squid there will no doubt be a school of hungry stripers chasing them down soon.

Redfish can be caught nearly year round from Virginia to Texas, but fall is your chance to catch a personal best. Like the northern pike mentioned above, redfish are searching to prey on baitfish that are spawning. Unlike the previously mentioned fish, however, redfish are fans of the warm water and will travel to find more of it. As the ambient water temps drop in the ocean, look for schools of big bull reds to travel more inland into estuaries, and brackish waters. The schools will have one thing on their mind, eating.

With such plentiful food in places like Louisiana, you don't always need to worry about matching the hatch with reds, but as the water cools down so can their preferences. Crabs, shrimp and mud minnows are always a good bet, however, as those species will also prefer to hole up in inland water for the winter months.

There are several different species of trout across the country and we couldn't pick just one. Browns, cutthroats, rainbows and brooktrout will all be hungry as the temps die down and fishing for all will arguably be at its peak in the fall. Trout are hungriest in the fallas they begin a sort of feeding frenzy in preparations for winter where their metabolism will slow way down.

Trout are often not thought of in the same category of predator like pike, but almost everything is on the dinner table come fall. Bait anglers will find great success with crickets and nightcrawlers and lure anglers can utilize any sort of spinner lures to replicate a smaller trout, or sculpin minnow. For fly anglers, there will still be plenty of hatches happening for topwater action, but streamer fishing will be exceptional. Many fly anglers will utilize mouse patterns this time of year for exciting topwater takes from hungry rainbows and browns.

Just like the pike they cohabitate with, walleye go on a feeding binge as the temperatures turn south. Walleye, like a lot of species, can be found at the edge of drop offs, near shallow weed beds in lakes. Also like the pike, they are targeting spawning baitfish to put on as many calories before you have to break out an auger to catch them.

Lakes aren’t the only habitat to find walleye, however. Fall is also a great time to target hyper aggressive river walleye as well. In rivers you can find walleye stacked up in deep pools, similar to the drop offs in lakes. The low water levels in fall make these deep pools more obvious and fish will begin piling up in them in preparation for summer.

Fall bass tactics are very similar to pike and walleye. Look for big bucket mouths in weeds and structure, near drop offs. Big bass are also looking to feed, but the bait, or lure, that may be a game changer from pike and walleye is crawfish. Bass often target the crustaceans mercilessly and it is a prime opportunity for you to match that hatch.

Trophy largemouths will hold out the longest in deeper water. Bass prey species will have grown significantly by this time in the year and you can switch your baits to larger selections to match the larger sized baitfish. These larger lures will also be more enticing as they will offer a more substantial meal during a time where calories count the most.

The fish of 10,000 casts lives up to its name year-round, but fall may be the best time to knock a couple casts off that number.

One of the best times to target muskie are low light hours like dawn and dusk. As fall takes hold, hours of high sunlight lessen, giving more low light hours of prime fishing. Overcast days are also more common, hiding that direct sunlight that muskie tend to avoid. This is even more true in far north lakes in Canada.

Like bass and other freshwater species, a large lure may attract a strike during a time when calories gained versus calories lost is of utmost importance.

Disclosure: All these advantages are still just tactics, merely causing you to make 9,000 casts for the elusive predator, instead of ten. You will still need a healthy amount of luck and maybe a miracle to catch a muskie.

Fall is arguably the best time to be on the water regardless of fishing success. We hope you take the time to enjoy the falling leaves, cool mornings and the gentle solitude to enjoy the natural beauty of fall. Make sure and post your fall photos onto the Fishbrain App to highlight this special time of year. 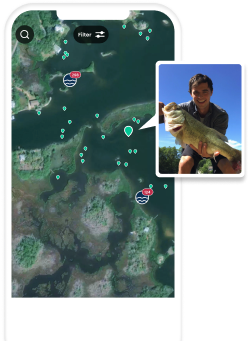